The City of Santa Clarita is proud to present New Heights, a series of FREE workshops, panel discussions, and lectures designed specifically to engage creative individuals, no matter what level of experience. The sessions will help artists and performers expand their knowledge while learning valuable tools to increase success. 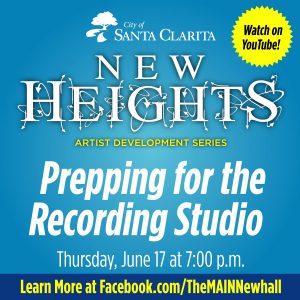 Panelists participating in this virtual discussion will talk about the need to be prepared prior to stepping foot into the studio. Pre-production is one of the most underrated and misunderstood parts of the recording process; if you don’t know how to prepare, you’re likely to spend a lot of time in the studio fumbling around with something under-pressure that could have been solved with a good-night’s sleep. 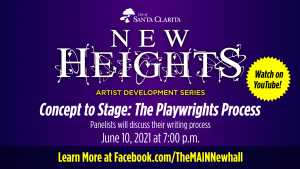 Panelists participating in this virtual discussion will talk about their writing process. Learn about all of the steps to create a play from an initial concept to a finished piece that is ready for the stage! These three published playwrights will also provide you with some tips and tricks.

Kitty Burns
Fairytales really do come true, which was proven to me in 1991 when my first play was published by Samuel French. Four more were published later, and all have been produced world-wide. I have had the privilege of seeing many productions of my plays in various parts of the country, which is a thrill I can’t even put into words.

Anthony Aguilar
Anthony Aguilar is a writer who was born and raised in Boyle Heights, California. Written works include the punk rock musical, Little Red, the superhero series El Verde, El Verde: Career Day, and For One Mariachi. He was commissioned by Center Theatre Group’s The Shop initiative for his stage-plays Emma & the Suzies and Annazul.

Wade Bradford
Wade Bradford has written over 40 plays for teen performers. His plays and musicals have been produced on six continents, and it frustrates him to know there’s one hold out left. Many times, musicians and bands that have created a great project by developing music and show to its fullest, fall flat when it comes to the business side of things. This panel of seasoned professional musicians will discuss how they navigate the money side of the industry. Learn how to negotiate, get comfortable with setting your rate, discard the myth of integrity versus compensation and more!

Calling all creatives and artists! Are you curious about how to use TikTok to showcase your artwork? Interested in learning about how to build a following? Then join the City of Santa Clarita’s New Heights free panel discussion “Tiktok for Artists” to discover what the most popular social media platform is all about and how to make it work for you.

Panelists:
Lian Parsons-Thomason is a Boston-based writer and journalist who is constantly on the hunt for compelling stories and creative ways to tell them. lianparsons-thomason.com
Harrison Carrillo is a Cal Poly SLO college student and pottery artist who has acquired over 1.8 million followers on TikTok through his unique, creative style of pottery and video ideas. Instagram: @PG13pottery

In this panel, two working actors and a casting director share their top tips for success with self-tape auditions, which have become the go-to method for casting during the pandemic. Panelists will highlight best practices and touch on key do’s and don’ts for actors.

Panelists:
Dajuan Johnson is a consistently working actor, certified life coach and the founder of Think Bigger Coaching. Currently you can catch him recurring as Detective Rondell Pierce on Amazon’s hit show BOSCH.
Helenna Santos is an actor, writer, and producer with Mighty Pharaoh Films. She was the founder/editor-in-chief of the entertainment website Ms. In The Biz for its seven year run.
Adrienne Stern is an active, sought-after casting director who casts both film and television. Her film projects have premiered at Sundance, Toronto, Cannes, Tribeca, Berlin, South by Southwest and various other prominent film festivals.
Moderator Jennifer Fischer is a filmmaker, arts educator and film curator. To date, her films have screened at more than 65 film festivals and garnered 15+ best of awards.